Skip to content
Home » Publication » The JNF/KKL: A Charity Complicit With Ethnic Cleansing

An Alternative Guide-Book to JNF/ KKL Forests and Recreational Areas as well as basic WZO, JNF & UN documents & other essays

Colonising, Dispossessing, and Denying. The Jewish National Fund was established in 1901 and was the principal tool for the Zionist colonisation of Palestine. It was an agency with which the Zionist movement bought land and profited from transactions of the land purchased. It was inaugurated by the Fifth Zionist Congress and remained throughout the Mandate years, 1918-1948, the spearhead of the Zionization of Palestine. From the onset of its activities, it was destined to become, and officially granted with the task of becoming, the custodian of the land in Palestine in the name of the Jewish people. It has not ceased to fulfil this role since the creation of the State of Israel, but, with time, other missions were added to this primordial task.

It is crucial to go back to its history and review it if one wishes to understand its present role. This is particularly important due to the image of the JNF today as a ‘green’ and ecological organization that safeguards Israel’s nature from being ruined by all the usual suspects: greedy contractors, government greediness and public indifference. In practice, its ‘enemies’ are Palestinian farmers and Bedouins who try to keep the little land they still have and which is ostensibly needed as ‘nature reserves’, but in practice will be given to Jewish settlers. From 1901 until today the JNF did not change its tactics nor did it deviate from its role as a principal Judaizer of the country.

Its worst crime was probably the role it played after the end of the 1948 war, when it became the principal divider of the spoils of the lands, villages, towns and houses looted by the Israeli army during the ethnic cleansing operation it committed on the ground.

This was done through the construction of a complex set-up that eventually, in the 1960s, created the Israel Land Administration (ILA) of which the JNF was a crucial component. The new state allocated afforestation to the JNF and all the land – most of which originally belonged to the destroyed villages – to the ILA (in which the JNF had a significant presence to ensure the Judaization of the land continued).

In the process of taking over what the expelled Palestinians were forced to leave behind, the JNF destroyed evicted villages, flattening them, before deciding which area would become a Jewish settlement and which a forest.

Uri Davis has not given up the struggle against what he aptly called the apartheid State of Israel ever since he became a mature young man in the 1960s; nor did he ever cease from his industrious effort to explain to the world, as best as he could, the origins of this apartheid and its practices on the ground.

This book is a testimony to both his moral commitment and his scholarly acumen. It is an exposure of what really lies behind the past, present and future actions of the JNF. But more than anything else, it is an incisive exploration of the crimes Israel committed against the Palestinians and which still today are at best misrepresented and at worst denied outside the State of Israel. This book will be one of the best tools for those wishing to confront these misrepresentations and denials for the sake of peace and justice in the land of Palestine. 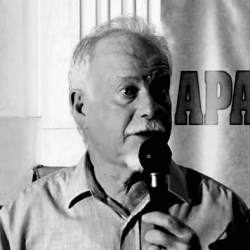 Dr Uri Davis is an anti-Zionist Palestinian of the Hebrew language group, citizen of the alleged constitutional monarchy of the UK and of the apartheid State of Israel, born in Jerusalem in 1943. He has been at the forefront of the defence of human rights in Israel, notably Palestinian rights, since 1965 and as an...