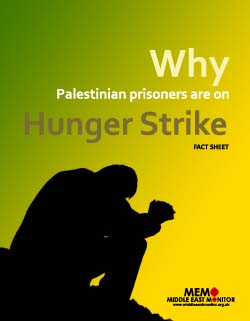 Why Palestinian prisoners are on hunger strike

1.1 – The issue of Palestinian prisoners is one of the worst consequences of the Israeli occupation. Since 1967, over 700,000 Palestinians, 20% of the population of the occupied West Bank and Gaza Strip have been detained. This number represents approximately 40% of the total male Palestinian population in the occupied territories.

1.2 – Today, there are about 6,000 prisoners in 17 Israeli jails and detention centres. They include six women and more than 200 minors.

1.3 – 330 Palestinians are being held in administrative detention with no formal charges having been brought against them in a court of law. 28 elected members of the parliament, and three former ministers fall within this category.

1.4 – Israel is currently holding all these Palestinian prisoners far away from their homes, and outside of the occupied territory. This constitutes a clear violation of the Fourth Geneva Convention relative to the Protection of Civilian Persons in Time of War. Article 76 of the Convention states:

“Protected persons accused of offences shall be detained in the occupied country, and if convicted they shall serve their sentences therein.”