Skip to content
Home » Publication » Wahhabism, the Brotherhood of those who obeyed Allah and ISIS: Has history repeated itself? 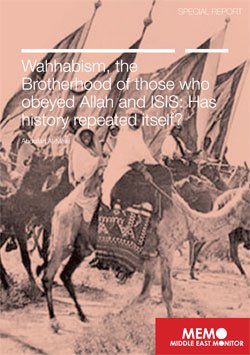 Wahhabism, the Brotherhood of those who obeyed Allah and ISIS: Has history repeated itself?

As a result of sluggishness and weakness it was subjected to in the wake of the downfall of the second Saudi Emirate and Al-Rashid’s domination over the Najd region, the historical allies of the Ottoman state, the Wahhabi movement lost the political authority that supported it and helped it and that enabled it to maintain influence and hegemony and to impose its school of thought on the general public.

However, the hopes of the movement’s preachers was revived when, one of the grandsons of Prince Faisal Bin Turki, King Abdulaziz bin Abdul Rahman embarked on the project of rebuilding the ruling family’s authority at the turn of the 20th Century.

Note: The organisation Al-Ikhwan (Brotherhood) referred to in this report is an ideological army of settled Bedouins that became known as Al-Ikhwan (Brotherhood). They contributed to the unification of the Arabian Peninsula under King Abdulaziz Al Saud. It has no relationship with the Muslim Brotherhood founded by Hassan Al Banna in Egypt in 1928. This report was first published in Arabic by altagreer.com.