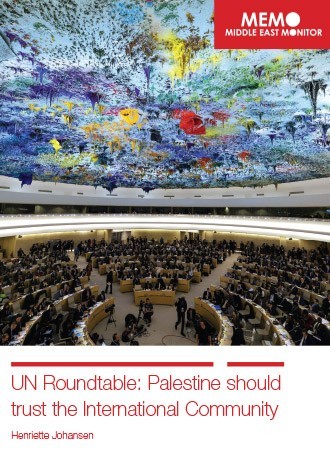 Earlier this year, Amnesty International reported about the ‘Trigger-happy’ Israel’s excessive use of force on Palestinians in the West Bank. Deputy Director of the organisation in the MENA region, Said Bou Madouha sent a letter to the Palestinian Authority, saying that amongst other things, the “Illegal use of excessive and lethal force by Israel raises dangerous concerns.” Deputy PA Information Minister Mahmoud Khalifa was urging all Palestinian institutions to keep track and proofs of Israeli injustices against Palestinians.

“Settlement construction in 2013 more than doubled compared to 2012. These actions are a clear violation of Articles 49 and 53 of the Fourth Geneva Convention,” Mr. Abdou Salam Diallo, chairman of The Committee on the Exercise of the Inalienable Rights of the Palestinian People said Sunday in an opening remark for a United Nations Roundtable on Legal Aspects of the Question of Palestine. During the introducing speeches, the long-awaited roundtable raised several international concerns for the future of Palestinian rights. On March 29, Israel failed to meet its commitment to release the fourth group of 26 Palestinian prisoners, which was a crucial part of the agreement with the US and Palestinians that led to the resumption of talks. Mr. Diallo said that Israel’s attitude “complicated the continuation of the political dialogue.”