Skip to content
Home » Publication » The body as the battlefield: victims of Syria’s brutal war strategy 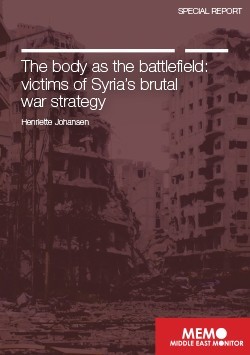 The body as the battlefield: victims of Syria’s brutal war strategy

The United Nations has released a new report documenting the evidence that children in Syria have been subject to grave sexual abuses in government detention, recruited to fight with the opposition, tortured and used as human shields.

Abuse of children in Syria is a central theme of the war ravaging the country. Indeed, what provoked the conflict was the alleged torture of children accused of painting anti-Government graffiti on public buildings. This was followed by expressions of popular discontent over political and socioeconomic rights which manifested themselves as intense civilian protests in Dar’a. Following the violent clampdown by Government forces, the demonstrations spread to other cities.