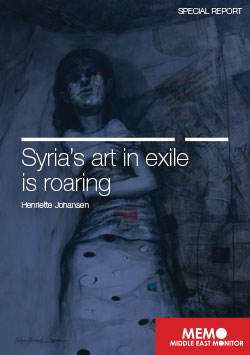 Syria’s art in exile is roaring

A Scream, a child in his eternal sleep, chains, passports with countless stamps, car wrecks, bombed-out buildings and numerous small models of corpses glued on to an empty canvas. Many Syrian artists are affected profoundly by the evils of their war-stricken homeland.

MEMO met up with a range of them to study their ways of trying to humanise a war that is so inhuman that new-born babies are perceived as culpable. We discussed their feelings and thoughts about their situation, and the artists’ quest to project a human face onto the empty but vast numbers of displaced people, to which Syrians feel they have been reduced. Their works manifest themselves as a fight for humanity strung out between an identity and personal experience and belief in the Syrian people to provide some hope in the hardest of times.