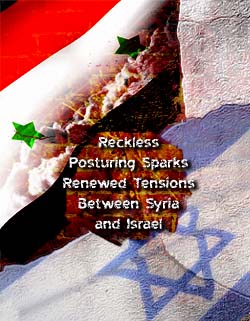 Tensions between long time adversaries Syria and Israel came to a head this month following an outburst of incendiary remarks and threats by the ultra-nationalist Israeli Foreign Minister Avigdor Lieberman. This development not only hampers any imminent prospects of a peace deal between the two states, but has also led to speculation over the possibility of a regional war.