Skip to content
Home » Publication » Palestinian prisoners in Israeli jails: Their legal status and their rights 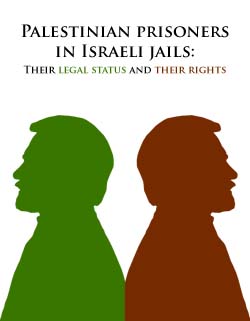 Palestinian prisoners in Israeli jails: Their legal status and their rights

The status of prisoners of war is a very complicated issue in international humanitarian law. Many people think – wrongly – that all of the Palestinian prisoners in Israeli jails are to be considered as prisoners of war. International humanitarian law, in particular the Third Geneva Convention of 1949 and its protocols, gives a very precise definition of “prisoner of war” which is not applicable to the majority of the Palestinians detained by the occupying power, Israel.

To understand this issue; we can divide the subject into two parts:

Reference to prison names and locations and the number of prisoners – male, female and children should be mentioned. We can refer here to Israel’s violation of article 76 of Fourth Geneva Convention which states that “protected persons” accused of offences shall be detained in the occupied country, and if convicted they shall serve their sentences therein.