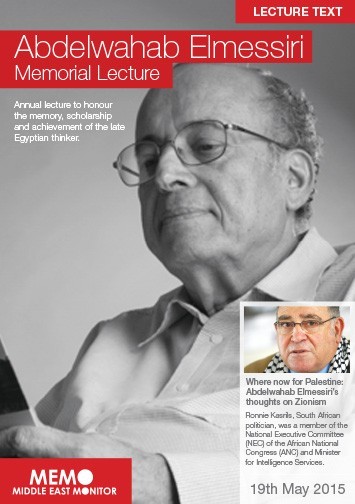 Delivered in May 2015 in London, this was the second annual Abdelwahab Elmessiri Memorial Lecture.

In examining apartheid South Africa, Elmessiri’s concept of Israel as a “Functional Zionist State,” illustrates a symbiotic relationship between the settler colonialism of both entities. He presented this thesis at the 2006 conference and published under the title “From functional Jewish communities to the Functional Zionist State.”

In this lecture, Ronnie Kasrils considers some of the remarkable similarities between apartheid South Africa and Zionist Israel. These coincide even as far as milestone dates are concerned. The characterisation firmly places both within the category of colonial settler states. Such consideration will extend to forms of resistance and seek to draw lessons from the South African struggle.

A prominent anti-apartheid activist, Kasrils was Minister for Intelligence Services from 27 April 2004 to 25 September 2008. He was a member of the National Executive Committee (NEC) of the African National Congress (ANC) from 1987 to 2007. Kasrils is known for his strong criticisms of the government of Israel and for his sympathies towards Palestinian political struggles. He rose to international prominence after penning a “Declaration of Conscience by South Africans of Jewish Descent” in 2001 against Israeli policies in the occupied territories. He has participated in events in the Palestinian Territories with all elected Palestinian parties. 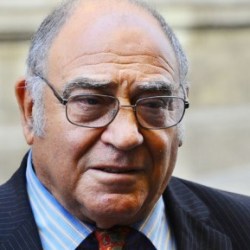 Ronald "Ronnie" Kasrils (born 15 November 1938) is a South African politician. He was Minister for Intelligence Services from 27 April 2004 to 25 September 2008. He was a member of the National Executive Committee (NEC) of the African National Congress (ANC) from 1987 to 2007 as well as a member of the Central Committee...