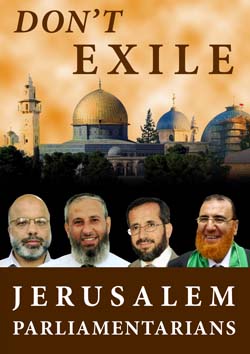 Palestinian Parliament members Detained at the Red Cross in Jerusalem

On July 1st 2010 four democratically elected members of the Palestinian Legislative Council sought refuge in the compound of the International Committee of the Red Cross in Jerusalem.

Muhammed Abu Teir, Ahmad Attoun, Muhammed Totah and Khaled Abu Arafeh (former Palestinian Authority Minister of Jerusalem Affairs) were elected in 2006, but like many others elected officials were subsequently imprisoned.

The Members were elected under the Change and Reform list representing constituencies in East Jerusalem.

In June 2010 the four PLC members were served with expulsion orders for disloyalty to the Israeli state and had their East Jerusalem residency permits revoked.

Though their homes and constituencies are in East Jerusalem they are threatened with expulsion to the West Bank.

East Jerusalem is recognised as Occupied Territory under international law and not part of Israel.

The Fourth Geneva Convention prohibits the forcible transfer of citizens of an Occupied Territory.

When served with the expulsion orders the PLC members entered the Red Cross compound to seek refuge.

Muhammed Abu Teir is currently in custody having since been arrested.

Two of the three PLC members have taken ill on various occasions and as they are unable to leave the compound have only had access to basic medical care.

They have been unable to visit their families and consequently their wives and children can only visit them in the compound.

All sectors of the Palestinian community are rallying together in support of the PLC members.

The Palestinian Authority have been advised to appeal to the UN Human Rights Court on behalf of the PLC Members.

The PLC members have called on the international community to apply pressure on Israel to recognise international law and to remove the expulsion orders.

The Red Cross compound has been the scene of numerous delegations of international visitors, including members of the British and European Parliaments.

Both Houses of the British parliament have discussed the issue of the PLC members.

The British government have made representations to the EU and to the Israeli Deputy Foreign Minister, Danny Ayalon via the British Ambassador to Israel.

The matter went to the Israeli High Court on September 6th but no outcome was reached and a further hearing is expected imminently.

The PLC members and their legal team suspect that the High Court is awaiting a political decision before they make a legal decision and hence have called for further international pressure to be applied on the Israeli authorities.

Further international pressure from other European countries is not widely reported and the EU have not released any statements on the current situation that the PLC members are faced with.

The PLC members’ case has not been widely reported in media, particularly in Europe.

Aljazeera Arabic did cover the case in July but the case has failed to gain any further prominence since this time.

One of the first delegations to the PLC members from the British Parliament was that of the British peers, Baroness Tonge, Lord Hylton and Lord Ahmed.

Although the Israeli authorities routinely patrol the area outside the Red Cross they have not entered the compound, though they are clearly poised for arrest should any of the PLC members leave the area.

Approximately 300 other expulsion orders have been served to East Jerusalem residents whose residency permits have ‘expired’.

It is feared that if the PLC members are expelled it will set a precedent for similar expulsion orders to be carried out.

Given the deportation orders alongside the home demotions it is clear that the Israeli authorities are attempting to forcibly transfer the Palestinian population of East Jerusalem.

Further international pressure is being called for in order to prevent the actions of Israeli authorities reaching a further, more devastating climax.