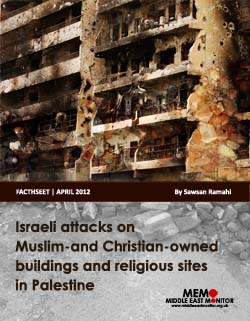 The recent escalation of Israeli attacks on Muslim and Christian religious sites in Palestine, including Jerusalem, other cities in the occupied West Bank and the area occupied in 1948, can be viewed as part of Israel’s assault on all things Palestinian since 1967. It is a war declared by Israel and waged by the occupation authority’s military and security forces as well as the illegal Jewish settlers. The latter form the spearhead of attacks against mosques with the cooperation and support of military personnel. Although the Israeli occupation authority describes such attacks as “criminal activity”, in reality they are attacks of a religious and socio-political nature.

Several Palestinian organisations have documented attacks against Muslim and Christian religious sites. In 2011 alone, for example, Al-Aqsa Foundation noted 150 assaults on Al-Aqsa Mosque and its surroundings. The Solidarity Foundation for Human Rights, meanwhile, believe that the Israeli military and illegal settlers have committed more than 96 attacks on non-Jewish religious sites in Palestine since the beginning of 2011; according to the Palestinian Waqf (religious endowment), there were 160 recorded Israeli violations against the holy sites throughout the year.