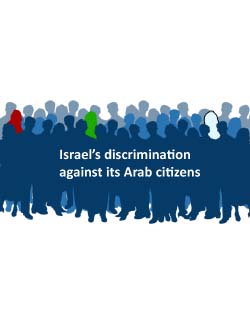 Israel’s discrimination against its Arab citizens

Racism was, and still is, an inherent feature of Zionism and the state established on its back, Israel. From its declaration of independence up to this day, the 20% of Israel’s citizens who are Arabs have suffered from the state’s racist policies and have been subjected to a fierce campaign of repression. Through racist laws and the demolition of their homes, the confiscation of their land and looting, the Arabs of Israel have seen their overwhelming majority ownership of the land pre-1948 reduced to just 2.5%, even though they make up more than 20% of Israel’s population. This is not an accident, but a planned programme by successive Israeli governments, with several goals: Forcing Arab citizens who hold Israeli citizenship to migrate and leave and, in the process, stirring up Jewish Israeli public opinion against their Arab compatriots by calling them “enemies” and “traitors” who are “working to undermine the Zionist project”.