Skip to content
Home » Publication » Gaza: Another winter of deaths 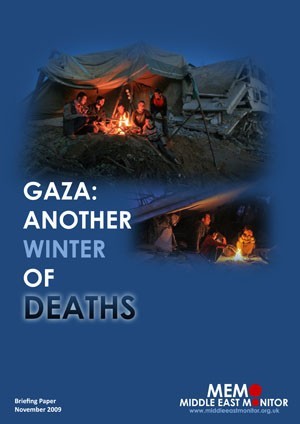 Gaza: Another winter of deaths

The people of Gaza have been suffering for more than two years now under an illegal siege put in place by Israel. This siege has been aided and abetted by the international community. Poverty, hunger, and disease have taken hold of the Gaza Strip and thousands of people are homeless as a result of the war. As winter approaches the situation will become worse. The people of Gaza – young people in particular – face a very bleak future.

Over 5,000 students graduate from the Gaza Strip’s universities every year. Very few are able to get jobs. Last June, UNRWA set up a programme to provide temporary unskilled employment, lasting only for the duration of the summer, to these graduates. However, when 27,000 university graduates applied, UNRWA was only able to provide 7,000 of them with even this short-term work which does not provide them with enough income to sustain themselves and their families and does not allow them to utilize their skills.