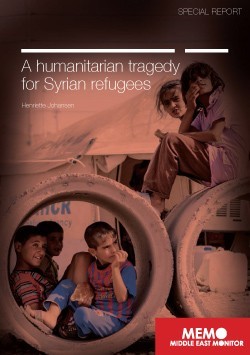 A humanitarian tragedy for Syrian refugees

Over the last year, the number of Syrian refugees has doubled five times over. Two weeks ago, the UN launched its largest appeal for a single humanitarian emergency ever, faced by the urgency of at least 2.3 million Syrian refugees in need of humanitarian assistance, in addition to the millions of internally displaced Syrians. The UN cited the vast numbers of displacement and called for the international community to take responsibility for the crisis, appealing for $6.5 billion in funds.

To keep pace with 2013’s alarming exodus, more than 196,000 tents and 809,000 plastic tarpaulins were distributed to refugees residing in camps and informal sites. As Syria approaches the end of its third year of conflict, dozens of refugee settlements are now clearly visible, even from outer space.